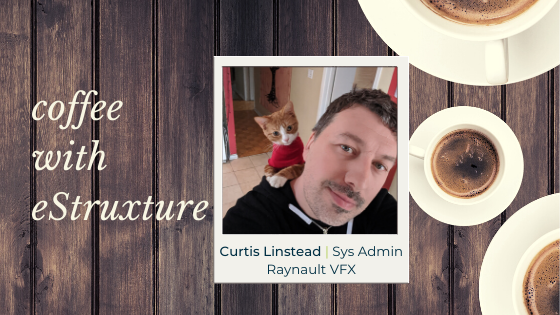 Curtis Linstead of Raynault VFX sat down with us for a casual chat and we're spilling the... coffee...

Who is Curtis Linstead?

I am the System Administrator at Raynault VFX and my job is to make sure that the company is always up and running. My career in IT started back in 1999 - one of my first jobs was Network Administrator for a company that did industrial dehumidifiers – I was straight out of high school and put into a job where I handled the entire network.

Talk about a big job right out of school! How did you feel about that?

It was scary, but at the same time, computers always came naturally to me. I think we got our first computer at the end of ’94 and that was it for me - I was a techie!

From there I moved to freelance jobs - IT consulting for small businesses and some web development. In 2006 I met one of the two founders of Rodeo VFX . He actually picked me to do a home job off of Craig’s list and then a week later he tells me they are opening a company and would like my help. It turns out the company was a visual effects studio and that’s how my career in VFX was launched!

I started working for Rodeo VFX in 2007 as freelance and then a year later I was brought on full time. At first it was mainly just me looking after the infrastructure but when Rodeo FX experienced a boom halfway through 2009, we brought in more IT. It was definitely an interesting learning time for me. The core of their business was on Mac and when I started there, I knew nothing about it. I was all Windows. But I walked out mastering both.

When the two founding partners of Rodeo FX (one of them was Mathieu Raynault) split in 2011, I went my own way, as well. Being now familiar with both Mac and Windows OS helped me grow my own business. I worked a lot with Davis Goodman – he was very well known in Montreal for VFX support. He now works with CDW full time. Soon enough, I became one of the go-to people for VFX IT help. That was between 2011-2016. I helped set up a couple of studios in Montreal and help take care several others, such as Folks VFX – it was an exciting time for my career. In 2016 I shifted to full time at Raynault and I am happy here.

Did you ever think you were going to stick with this niche: IT for VFX? And would you see yourself making a shift to something different?

I didn’t anticipate it, it just how it played out for me. At the moment, we’ll see what the future brings. I am happy where I am right now and the VFX industry is just too much fun.  Being part of the VFX community is special – it’s all about the culture. Everyone will tell you that the VFX community is so big but at the same time so small. When I’d go from studio to studio, I would know everyone.

Could you share with us some of the titles you worked on throughout your career?

At Rodeo it started with Lost World 3D, but one of the first one that I got credited for Resident Evil: Afterlife – that blew me away! To find out that I was now officially tagged in the VFX industry was incredible. That may have been the turning point for me, when I realised how much I love this! Recently we have been doing a lot of work for Netflix and HBO and other streaming services and in December we wrapped up Watchmen and 6 Underground. I also got credited for Aquaman – we designed the cityscape at Raynault. We are known for creating worlds and it’s extremely interesting to watch it as they get developed. I also worked on Rogue One and Solo: A Star Wars Story and the Netflix mini-series, Maniac.

You are listed on IMBD for those titles! It must be such a thrill to be recognized as contributor to these big titles.

It really is! Some of my family are still just finding out I have credit s and they flip out.

What about your day-to-day tasks?

Day to day can rage anywhere from R&D to maintaining the servers, the workstations, figuring out new technologies, new ways to advance our network and tools and working in close conjunction with the developers and taking calls from the artists. And working with artists require a very fast response time. Raynault is a small/medium company but we function at the level of a larger studio, especially when it comes to the quality of our output. Our clients are constantly blown away by the work we do given our size. But being smaller pushes us to be more cutting edge on the technology side while also ensuring that uptime for the artists is key. We now have three techs who are working on programming our pipeline and the artist tools.

For me it’s 7 to 5. I sometimes get calls after hours and on the weekend but I’ve managed to design and maintain the network in such a way that after hour calls are extremely rare. I don’t usually need to put out fires.

What do VFX artists need more of? Space!

When it does happen that you have to put out a fire, what’s the most common one?

Space! My artists love to use up space. I never thought I’d have to tell an artist: hey, we only have 10Tb left - that’s not enough! You need to clean up your shots, tell me what can be removed. Ultimately, I encourage the artist to refine their process and work more efficiently.

Every year the data grows more and more. We grow our render farm every year. And when we get more space, we realize we need more power. Space and power are vital and I need to ensure that the artists work within the confines of our infrastructure.

You’ve been hosting in our MTL-1 facility since 2016 (at the time the facility was owned by Netelligent). What does your infrastructure look like now and how has it evolved since 2016?

We have been keeping our infrastructure fairly simple. We have in-house workstations, a couple of small servers and then our backbone infrastructure. And from there we are connected via dark fiber to eStruxture’s MTL-1 data center to our rack that contains the core of our operations: servers, linked renderers, various other remote access servers for our artists to work with. We also have storage – 150Tb in one rack. Our infrastructure hasn’t shifted too much from 2016 to now. When we opened the office in Montreal on St Laurent Street in 2016, we built the office to be compliant with Disney auditing guidelines, ensuring that our network backbone was tight and secure, that there was segregation of the artists from the internet, etc. And that format has remained at the base of our setup to date. We do small network upgrades here and there but we strive to keep as minimal a footprint as possible to ensure sustainability of the company. We try not to grow too fast – the great thing about working for Matthieu is that he develops the studio to be sustainable. We don’t want to be just another case of a studio that grows too fast and then blows up.

You work with our partners at CDW and use StudioCloud. How much cloud rendering do you do?

A lot! It’s a solid service that we really like. We have several render nodes that we rent long-term from StudioCloud. We especially like the fact that we can rent some of the nodes to other studios when we have a slower season. We rent out our nodes about 1/3 of the year. And in peak season, when we need to scale up, we rent out nodes for the short-term either from StudioCloud or other studios.

What about bursting to the public cloud?

TPN is just now starting to allow bursting to the public cloud such as AWS – but we still have to comply with various aspects such as whitelisting, blacklisting, direct connections, encryption. We are considering bursting in the public cloud but our main focus is on remaining compliant.

Do you think cloud bursting would be more cost-efficient?

It could in some cases. But for us having bare metal machines with StudioCloud comes out cheaper than bursting to the public cloud. Bursting is great for last minute, temporary work. Like: we have 20,000 frames and need rendering (2 hours a frame). Then if we add the need for space, bandwidth, the amount of data we throw out there, bursting in the cloud can be difficult – you have to spin up VMs and the cost increases exponentially.

Streaming giants such as Netflix and Amazon Prime smooth out the workload peaks and valleys of VFX studios.

When is peak season for you?

It depends from one job to another. Now with the streaming services such as Netflix, Prime, etc. there are not as many peaks and valleys. It used to be the case when we mostly worked on films. Now it’s a more constant flow.

What are some of the trends that you’re seeing in the industry?

One of the big trends on the IT scale that we are trying to manage nowadays are the constantly growing security requirements that have been coming out from the bigger studios for the past 5 years or so. For example: artists cannot be connected to the internet, we have to have security cameras everywhere and sometimes we need to bring our food in clear containers – but that’s another story! Presently, instead of these requirements coming from different studios, we get them from TPN – they send us a list of hundreds of items that we need to comply with. As sys admins we try to work with that list although sometimes we’d appreciate a better flow of conversation between us and them.  The TPN rules are also more stringent than the MPAA guidelines. They send in auditors, we get tested, annual checks, questionnaires, remediation items, etc.

Another trend is the push to the cloud – this can get complicated within the context of security. The TPN is requiring us to not be internet-based but more software and service providers ask us to connect to the internet for things like licensing for example. I am hoping the single sign on licensing part is a fad and that software companies understand that studios can’t really do that because it breaks stuff for us.

What’s on your wish list as a sys admin?

A data center where when we power down our rack, there is less of a cost.

Last but not least: are you a coffee or tea person?

Tea! Tea is my morning ritual.

Coffee with eStruxture is a series of casual interviews with our customers, partners and friends. These interviews provide a candid look at the extended eStruxture Family.

Want to have coffee with eStruxture? Email: angela.adam@estruxture.com and let's talk. Coffee's on us.